Channeled Message From Deirdre of the Sorrows

Channeled Voices of the Sacred Sisterhood

Coming Out Of My Spiritual Closet

When You Know Better, You Do Better

Home A Daughter’s Tribute To Her WWII Dad

A Daughter’s Tribute To Her WWII Dad 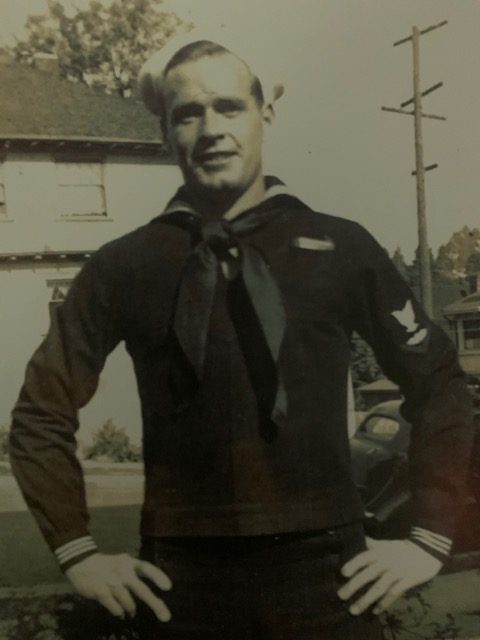 I was a child of a World War II Navy veteran who married my Mom before the Japanese attacked Pearl Harbor. Dad was stationed at Norfolk, Virginia Navy Station when the war in the South Pacific exploded on December 7, 1941, with what Franklin Delano Roosevelt called “ a date which will live in infamy.” It was a date that would be remembered for Pearl Harbor, but also when my Dad’s suppressed, traumatized war memories began to become his personal, lifelong nightmares.

I grew up in a post war household like many baby boomers my age after WWII ended. My Mom loved to tell the story of how after she and Dad were married, and living in Norfolk, they were out having dinner with his mother, Alma, when the sirens went off and the news of Pearl Harbor exploded across the country.

Dad was secretly AWOL from the Navy base that day, December 7, 1941, and had to race back to the naval base before he could be discovered missing. That was the last my Mom saw or knew where my Dad was for over two years. That was classified information during wartime, even for families left behind.

Even my Dad didn’t know where he was being shipped off to once he arrived back to base. He was supposed to have shipped out on the battleship, Lexington, but missed it by being shipped out to the island of Espiritu Santu in the South Pacific while the Lexington sailed off into history to be sunk during the Battle of the Coral Sea.

While missing his ship ensured the Brigger legacy including our family today, it was much later that we began to find out in bits and pieces, his deep sense of grief and loss at not being with his fellow seaman, his Brothers In Arms, that fateful day in the Coral Seas.

Dad was stationed on the South Pacific island of Espiritu Santo, which was located in the New Hebrides, now called Vanuatu. He was a mechanic for the warplanes that flew in there for repair after heavy air fighting with the Japanese. Dad would be one of the many aircraft mechanics waiting on the runways for these disabled warplanes to almost crash on landing due to wounded, or often, dead airmen that Dad would have to pull out of the cockpit.

I remember once, and only once, Dad telling me of pulling dead or wounded airmen, sometimes in pieces, out of machine gun riddled aircraft with tears running down his face.  He said once the airmen were pulled out and turned over to medics, their job was to quickly repair, or bandaid, the battle scarred aircraft to immediately send back into air warfare over the Pacific.

Dad never mentioned the dead and wounded airmen he pulled out of those warplanes to me again, but I will never forget the look of horror, grief, and tears streaming down his face that haunts me to this day.

Me, my brothers and sisters grew up with Dad regaling us with  tall  tales of  his time in the South Pacific war theater. Though based on fact, each story grew taller through the years of Dad fighting off octopuses and sharks with just a knife while swimming in the Pacific waters. How we loved hearing those tales around the dinner table and Dad’s status of being my hero grew bigger and bigger with each telling of those sea creature encounters.

Those stories continue today with his grandchildren, yet little did we know they hid a deeper story of loss, grief, and fear that gnawed my Dad’s soul and heart until the last hours of his death. He kept the stories of war horror to himself, too traumatized to share with his children, my Mom, or even himself.

A Little Dog and a Drain Pipe

It took the last year of his life for my Dad to begin to open up about his war years. Growing up, Dad never spoke of being afraid of what he experienced during WWII. The first time Dad ever told me about his fear while in the South Pacific, I was well into my 50’s.

Dad told me how once the Espiritu Santu airbase he was stationed at was being bombed by the Japanese. This caused him to run for cover in an empty, broken underground drainpipe that also held a terrified little dog. Dad said he grabbed the little dog, holding the little canine tight as they both shook with fear while waiting for the bombing to stop. I remember being stunned to hear for the first time in my life that Dad had been scared during the war. I asked Dad if he had been afraid often, and he said yes, but you didn’t focus on it, you had a job to do.

I remember looking at my Dad as he told that story thinking how could I love him any more than I did at that moment in time, a memory that still brings tears to my eyes today.

It was at that moment, Dad instilled in me we could be afraid of life, but not LIVE in that fear. That we all held a responsibility to complete the job we came for, regardless of how difficult it could be sometimes.

As Dad journeyed into the last year of his life, our time together became personal confessions of the fear and horror he experienced during his service in World War II. Dad seemed at times relieved by telling me the real stories of war he kept hidden from us kids. Other times Dad was talking as a young man stuck in time, still pulling dead and wounded airmen out of cockpits while desperately trying to repair aircraft to be sent back up into the carnage of the sky.

The Voice of the Young Sailor

It was during the last hours of Dad’s life as he slipped into a coma, that I heard the voice of the young sailor he once was screaming out his repressed wartime nightmares. As I stood by his bed, I witnessed the young man my Dad had once been. A young man sent to war when he was barely over 20 years old to become part of the history of WWII. A young man who at this moment in time while walking between life and spirit mourned the deaths of his Brothers In Arms. A young man who witnessed atrocities that no one should live with, but he did.  A young man who held onto a little dog in an open drain pipe, terrified at the bombing going on around him. I have never loved someone as much as I did my Dad during these last moments of his life. For I saw more than the young man he once was, I saw the fullness of what made my Dad the Hero he was to me, his family, and his grandchildren.

Brothers In Arms And A Little Dog Welcomed Dad Home

Dad eventually grew quiet and peaceful within his last minutes before the Angels took him away to be reunited with his Brothers In Arms who had gone before him. As Dad’s spirit gently lifted away, I felt a bump on my leg and as I looked down, I saw a little dog running after Dad’s spirit. It was then I realized it was the little dog from the drainpipe, both of them Safe at Home in Eternal Love.

Yes, Pearl Harbor, December 7, 1941, is a date that went down in infamy, especially for the brave men and women like my Dad, whose lives were lost or changed within the horrors of that war. That date of infamy was more than the start of the war, it changed the future for us too. Many of my generation which followed these WWII veterans were shaped and formed from the haunted memories of these brave men and women who fought the war that began on “date of infamy.” They became what was called the Greatest Generation which began for many of them on December 7, 1941.

To the Greatest Generation who served in World War II, both in the European and South Pacific theater, I salute you with deep reverence, honor, and respect. And to my Dad, thank you for your service, your courage in times of fear. You have passed that courage down to your children and grandchildren which has become the Brigger Legacy as it continues into future generations.

Most of all Dad, I am glad you missed boarding the Lexington after that date of infamy to sail away to certain death beneath the Coral Sea. For if you had, I would not have had the privilege and honor to be “ one of your girls, ” your “Beanbag,” or Mr.Brigger’s daughter. I love you always and forever, Dad. Rest in Peace and Safe at Home. And your little dog too!

To Know More About Mary Jane Brigger, Go To :